Born and raised in NY, Rob moved to Los Angeles to further his career in drumming at age 22.

Rob has Music Directed and played drums for Oh Honey, Julia Michaels, Troye Sivan, Maggie Lindemann, Rainey Qualley (Rainsford), Corey Harper, Rad Horror, among many others. This has placed him alongside music greats at a young age. This has included a sold out World Tour with Lauv, opening on an arena tour with Ed Sheeran in Asia, a Stadium tour in the US opening for Ed Sheeran, a James Blunt arena tour throughout United States and Canada, followed by opening a full North American run with The Fray, as well as additional tours with Ingrid Michaelson, and multiple tours with American Authors. Rob has also performed on television, radio, and at numerous music festivals around the world. Recently, he has performed on the 2018 MTV Video Music Awards, 2018 Teen Choice Awards, The Late Late Show w/ James Corden, Tonight Show w/ Jimmy Fallon, just to name a few.

He is currently Music Directing and Drumming for another LAUV World Tour, and doing the same with AJ Mitchell when he’s free. 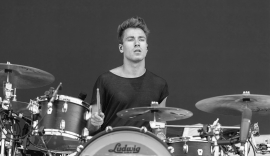