I have my own recording studio ‘’BONZO’’  where I give drum lessons as well as recording for many famous Turkish rock,pop and metal music groups' albums such as Cem Adrian,Deniz Tuzcuoglu , Hellosomody,Metin Turkcan and so on.

On the other hand ,I currently work for many famous musicians on behalf of the studio and live performances in Turkey. I have been playing for the guitarist of Pentagram and Sebnem Ferah, Metin Turkcan (other name Meteboy) for solo projects since 2009.

In 2016, we made an album named "Vakti Geldi" with Metin Turkcan.and this album was the first album what similiar to the Slash album.

Almost all of Turkey's rock vocals were singing song on the album. Apart from these, I work with famous Turkish singer Cem Adrian and make album recordings and play in his live performances.

At the end of the year 2016, 50th Anniversary album of singer Zulfu Livaneli was released which is very important album for the Turkey. Almost all the best musicians in Turkey sung on this album and I played drum for a song named "Yangin Yeri" what is interpretation of musician Harun Tekin from Mor ve Otesi rock group. 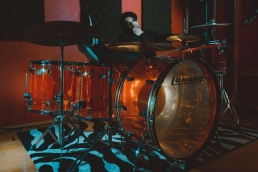