Noah began playing drums in 1998 when he and his best friend Alex formed their band, Global Nail Polish. They self-released the single “Lying On The Bathroom Floor” for limited distribution of 6 copies in Ms. Maw-Deis’ fifth grade art class.

He went on to attend Oberlin Conservatory of Music and College where he studied with legends Billy Hart and Jamey Haddad. After graduating, Noah moved to Brooklyn, New York, where he immersed himself in the music scene, leading to fruitful collaborations, friendship, and grueling world tours.

He has made music for many years with Eleanor Friedberger and can be heard on her critically-acclaimed album “New View”. Together they performed as the musical guests on both Late Night With Jimmy Fallon and Late Night with Seth Meyers.

Noah learned to play his fastest and longest single stroke rolls as a member of the percussion ensemble Man Forever (Kid Millions of Oneida). He is featured on the album “Live at Cafe OTO”, recorded (live) in London.

Noah was the drummer of Porches in support of their album “The House”.

Once, Noah did karaoke with Martin Rev of Suicide at a Hilton hotel bar in Pittsburgh. This life-altering experience was a not insignificant byproduct of joining Dean Wareham (Galaxie 500, Luna) and Eleanor Friedberger to perform live scores of Andy Warhol films in the series Exposed: Songs for Unseen Warhol Films. In addition to Rev, Wareham, and Friedberger, the show featured performances by Tom Verlaine (Television) and Bradford Cox (Deerhunter) at venues such as Barbican Hall in London and the Philharmonie in Paris.

Noah loves Ludwig drums and his parents’ dogs, but not as much as writing his bio. 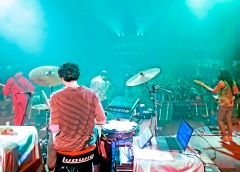 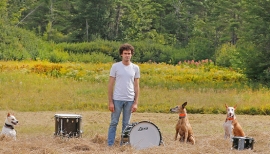