José is an undeniable pillar of the drum community. His passion for drums has helped establish an amazing community cherished by drummers around the world.

In 2009 he opened @Revival_Drum_Shop in Portland, OR with a single aspiration: create a place for drummers to find unique, inspiring pieces in a curated and inviting environment.

Since then he has gone on to curate and host “The Drummers Den” and “Deep Happening” write and publish two books: “The Stoic Drummer” and “A Drummers Ethos”, serve as the Vintage Drum Specialist for Fred Amisen’s Netflix Special “Standup For Drummers” and most recently he produced the “Revival Drum Sample Library, Volume 1.” 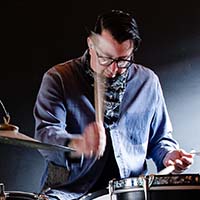