Born in Canada, in 1981, Jeffery lives in Portugal since 1985. He starts his musical studies very early, starting quickly on percussion. Later, he enters the Calouste Gulbenkian Conservatory, in Aveiro. It is at Escola Profissional de Música de Espinho (EPME) that he studies, in the years of 1996/1999 and finishes the course with a recital of 19 /20. At the same time, he performs several concerts with the percussion group, with the Orquestra de Sopros and with the Orquestra de Cordas of EPME, playing solo the "Concerto for Marimba and Orchestra" by composer Ney Rosauro, at the Youth Music festival in Murcia (Spain).

Jeffery participates in several seminars and master classes with musicians like Ricardo Fernandez (Latin percussion); Kroumata Percussion Group (Chamber music); Jesus Chapi (Jazz vibraphone) e Emmanuel Séjourné (vibraphone) and percussionist Steven Schick (Multi-Percussion). In mid 90, he is admitted to the College of Music and Performing Arts School (ESMAE), in Oporto. During his stay at ESMAE, he studies with Miguel Bernat and Manuel Campos; He undergoes various internships with the Symphony Orchestra of the School and as a member of the Drumming Percussion Group.

It is with Drumming Percussion Group that he performs various concerts in Europe and makes several world premieres of pieces from national and international composers such as: Mário Laginha; João Pedro Oliveira; Emmanuel Nunes; Carlos Azevedo; Jesus Torres; Emmanuel Séjourné, among others. In March 2002, he is granted a scholarship to attend a course at the "Berklee College of Music". He completes the course (bachelor) at ESMAE, in November of that year (2002) with the highest grade at the end of his recital. (20 /20). In January 2003, he moves to the USA where he begins the Jazz Performance Vibraphone course (Bachelor Degree) at Berklee College of Music, having concluded it in May 2006 with the status of Summa Cum Laude. He stands out as the top vibraphonist of the school. He wins several awards from Berklee, namely: the award for Most Active Mallet Player; and the prize for academic excellence Dean of Curriculum.

He also receives from IAJE (International Association for Jazz Education) the award for Outstanding Musicianship. During this period he plays at various jazz festivals in both the United States and Europe such as JVC Festival in New York, Jazz Festival Valado de Frades in Portugal, North Sea Jazz Festival, among others. It is in the United States you have the opportunity to work with jazz musicians, such as: Hal Crook; Joe Lovano; Gary Burton; Dave Liebman; Dave Samuels; Phil Wilson; Terrence Blanchard; Michel Camilo; Steve Swallow; Ed Saindon; Vitor Mendoza; Roswel Rudd; Alex Terrier, among others .

Upon his return he has played with musicians such as Myron Waldon, Darren Barrett, Anders Christensen, Marc Miralta, André Fernandes, Óscar Marcelino da Graça, Demian Cabaud, Federico Casagrande, Nelson Cascais, among many others. He made premieres of several works, written exclusively for him and for these groups by composers such as, Andreia Pinto Correia, Filipe Vieira, João Pedro Oliveira, Paulo Perfect, Oscar Grace, Nuno Costa, Daniel Bernardes and others. He has played in some jazz festivals, in Portugal, as well as in several European countries. He performs several solo recitals, throughout Europe, with a repertoire written for himself and also with improvised music. He stands out, in the music community , as a composer, having written music for Kinetix Duo; flux Ensemble; XL Trio; Drumming – Group Percussion; Quad Quartet; Pedro Carneiro / Jeff Davis Duo; Romeu Costa and Pedro Carneiro.

Jeffery Davis remains active in the real of jazz and classical music, performing several solo recitals, as well as concerts for vibraphone and orchestra.. He conducts masterclasses in some of the most prestigious national and European schools,. and also performs several concerts with both national and international renown musicians. 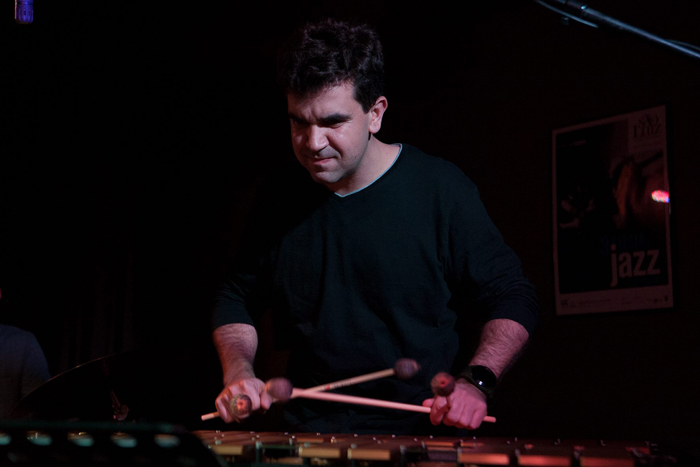