In 2018 he began work at WAAPA as a sessional lecturer, teaching drummers in the contemporary course. The same year, his band supported Royal Blood and Nothing But Thieves, and went on their first tour of UK/EUR. His band have now been to the UK and Europe many more times and have also toured through the US and Japan. Danny’s favourite gigs to play are festivals, and PPC’s third full length album ‘And Now for the Whatchmacallits’ has thrown them into the festival circuit globally with some major festivals under their belt: Splendour in the Grass, SXSW, The Great Escape, All Points East, Desert Daze, Spilt Milk, Best Kept Secret, Truck, Y Not?, Groovin’ the Moo, Falls Festival, and Laneway Festival.

Danny also has a passion for studio recording and has started a music production company called Macando Music with his brother Ben Caddy (violist with the West Australian Symphony Orchestra). The Macando Music Studio is being used frequently for online teaching and recording. 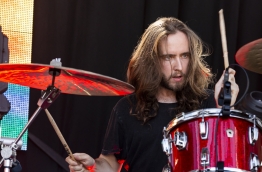