Recognized as one or Nashville’s top drummers, Ben has spend the past 15+ years preforming to music’s biggest stages with country superstar, Brad Paisley. Ben has not only been a staple to Brad’s live shows but also featured in 10 of Brad’s albums, 4 of which have gone Double-Platinum with features on 20 No.1 Singles. His performance credits are further recognized with 10 Grammy nominations, 2 Grammy wins, and a Grammy for drumming and co-writing Paisley’s hit song “Throttleneck”.

Along with his work with Brad Paisley, Ben has also built himself a remarkable resume which includes both live and in-studio work with Keith Urban, Taylor Swift, B.B. King, John Mayer, The Black Crowes, Carrie Underwood, ZZ Top, and several, several other top-class artists. 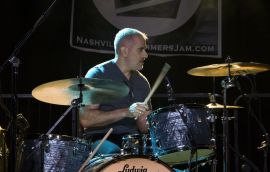