The old paint factory behind the Austin's home supplied the drums and small broken limbs from the trees in the yard supplied the sticks for what was to become the first percussion instruments for a young boy in Chicago simply known as Tim. After seeing James Brown and Jackie Wilson performed in Chicago at the Regal Theatre (known for showcasing the Motown Review), Tim had his first real set of drums in 1964. When he was 20 years old he was discovered by Pop Staples of the world famous Staple Singers and played for them over 25 years, eventually becoming their band director.

The list of performers that Tim has played for is like a who's who in the world of blues. Buddy Guy, The Staples Singers, Mavis Staples, Otis Rush, Eddie "the Chief" Clearwater, Luther Allison, James Cotton, Junior Wells, Big J. McNealy, John Mayer, Warren Haynes, Santana, Nellie "Tiger" Travis, Billy Branch, Sugar Blue, Artie "Blues Boy" White, Phil Guy, John Mayo, Matthew Skoller, Joanna Connor and the list goes on and on. Tim's handy work can be heard on many recordings of the world's best blues performers..... past and present. Tim is presently touring with blues great and Hall of Famer Buddy Guy. 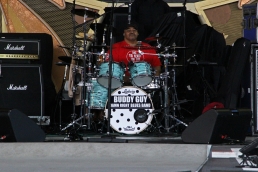 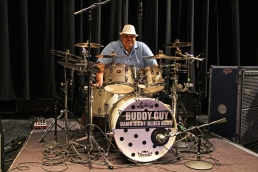