Vibraphonist/Composer Ted Piltzecker has eclectic musical interests. He has performed at jazz and percussion festivals, and in concerts throughout the United States and around the globe. (Germany, Austria, England, China, Brazil, Norway, Nepal, India, Australia, Iceland, Turkey, The Netherlands, Argentina, Peru, Sweden, Mexico, Canada, Japan, Finland, and Puerto Rico). His five albums as a leader have been critically acclaimed and influential in both the percussion and jazz worlds.

mature musicians who are committed to the ensemble.” Jazz writer and critic, the late Nat Hentoff praised the album as “a lyrical, thoughtful, relaxing meeting of mutually appreciative improvisers whose time is timeless.” All About Jazz reports that in his solo vibraphone album, Standing Alone (a collection of standards)  “fills the 43-minutes with expressive grace, maintaining interest throughout.” Muse calls it “a simultaneously technically impressive and deeply relaxing listening experience.” His release Steppe Forward  has been cited as “an upbeat, joyous and uplifting album, from beginning to end” by All About Jazz, and “a nice voyage into what good jazz is all about in contemporary times” by the Jazz Review. Ted's 2018 release entitled Brindica that is a reflection of his recent four-month venture around the world. It was recorded in New York and in Buenos Aires. "Piltzecker writes and arranges tunes that draw on tango, second-line, Afro-Cuban, South African, and even carnatic influences, always in an organic, fun, and respectful way. The result is a stylistic kaleidoscope of an album that reveals new combinations of rhythm and harmony at every turn and always sparkes with wit and good humor." CDHotList

Ted Piltzecker has received awards from the National Endowment for the Arts, the New York State Council on the Arts, the New Jersey State Council on the Arts, The Lincoln Center Institute, and the ASCAP Foundation. His works have been aired on National Public Radio’s "Performance Today" and the Canadian Broadcasting Company’s "Arts National" and have been performed by the Philadelphia Orchestra Chamber Ensemble at the Kimmel Center for the Performing Arts. As a guest of the People’s Republic of China, he premiered new works for percussion at the Conservatories in Beijing and Wuhan in the summer of 2013. In the summer of 2014 he premiered two new works, one for wind ensemble and one for jazz band at the Conservatório de Tatuí in Brazil. He is an associate professor of music composition at the Purchase Conservatory of Music, State University of New York and also teaches vibraphone at the Hartt School in Connecticut.

Ted is a graduate of the Eastman and Manhattan Schools of Music. He is an active pilot and unicyclist who performs using Musser vibraphones and his signature Mike Balter mallets exclusively. Additional information, including recordings and videos, may be found at TedVibes.com. 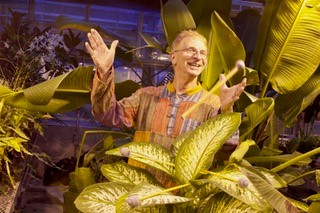