Sung-Bae Jeon (Holy Grail) is a drummer of the hip hop band "Workmanship." He started playing drums in the fifth grade as a hobby in church. After he realized he wanted to become a drummer, he got into the musical arts in high school to develop his career in drumming. After high school, Sung-Bae started working towards a degree in drumming at Dong-Ah Institute of Media and Art (DIMA) at the age of 22. Recommended by the professor of DIMA, he got into AOMG'S dedicated hip-hop team, Workmanship.

Sung-Bae performed at the Indonesian K-POP concert in October 2019 with Tiffany Young. He had a lot of musical influence come from J Dilla's music, and his performance was heavily influenced by drummers such as Chris Dave, Adam Deitch, Mark Colenburg and Justin Tyson. His drum style is derived through Ludwig's Neusonic Series of drums which gives his mucis a good live tone." 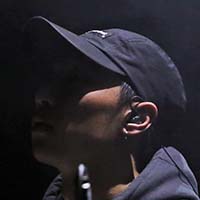