Sebastian Thomson is a drummer, songwriter, and producer based in NYC but originally from Argentina. He was first known as the drummer in Trans Am, one of the seminal post rock bands that started in the late 90s in Washington DC. Trans Am helped to create the post rock genre, has released 10 studio albums, and is still active. In 2013 Thomson joined Baroness after the departure of their original drummer. After touring extensively in 2013, Baroness and Thomson spent 2014 writing a new album which was produced by Dave Fridmann and will be released in December 2015. Thomson also has a solo project called Publicist which is a house/techno in which Thomson plays drum kit live along with sequenced synths. 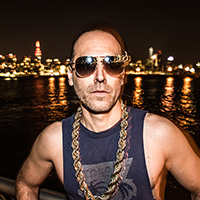