A Tennessee native, Ron grew up in Chattanooga, TN and first began playing the drums in 1971. 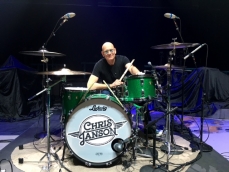