Dick began studying the vibes in Grammar school with marimba master Jose Bethancourt of the Chicago Symphony. He attended Notre Dame H.S., which also produced pianists Jim McNeely, Al Pheeney and trombonist James Pankow. While there he was awarded "best soloist" at the state competition. He attended North Texas State Univ. for one year and took a quartet to the Collegiate Jazz Festival where he was judged, "an excellent player" by Julian "Cannonball" Adderley. The following year he attended Northwestern Univ. playing in the lab band as a soloist along side David Sanborn. He left Northwestern to form The Quartet Four with drummer Maurice White, who later founded Earth, Wind and Fire.

He relocated to Louisville Kentucky and played clubs and festivals throughout the midwest including The Jazz Showcase and the Green Mill in Chicago as well as The Jazz Kitchen In Indianapolis and the Blue Wisp in Cincinnatti . He has toured Great Britain five times, where he played prominent venues including the Pizza Express in London, where he received rave reviews. A few of the musicians he performed at Jazz Festivals with are Milt Hinton, David "Fathead' Newman, Willie Pickens, Ira Sullivan, Fred Hersch and Barry Ries.

Sisto has given clinics and master classes throughout the U.S. including the Univ. of N. Texas, Queens College in N.Y. and at Leigh Howard Stephen's World Vibe Congress in Asbury Pk. New Jersey. He is the author of the popular Jazz Vibraphone Book, which is used as a text in many schools and has been the Vibraphone teacher at the Jamey Aebersold Summer Jazz Workshops for many years. He is a Musser vibraphone artist and has two Signature mallet models with Mike Balter Mallets.

As the host of two long-running Public Radio shows for the Louisville Public Media NPR affiliate station, Sisto has interviewed and performed with Phil Woods, Toots Thielmans, Fred Hersch, Kenny Werner , Don Braden, Barry Ries, Rufus Reid, Bob Bodley and many of the others mentioned in other contexts.

The original music on the CD Soul Searching was used as the sound track for the DVD documentary of the same name about the life of the monk, writer Thomas Merton, whom Sisto knew in the 60's. The DVD has been aired several times on PBS. 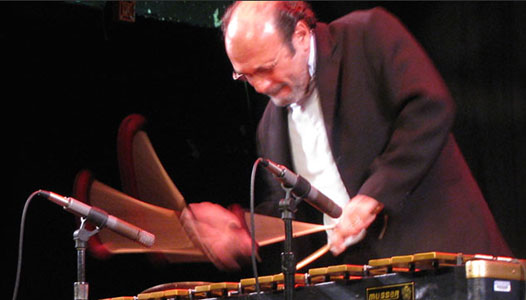