Matthew Stevens was born and raised in Ashland, Kentucky. He started playing drums as a senior in high school and quickly formed a band with his older brother Ish on guitar. After his college years Matthew moved to Nashville, TN and started paying his musical dues by playing clubs around town. Matthew also started playing recording sessions for local songwriters and because of his singing abilities he was able to also sing on these recordings.

For the next 20 years, Matthew has had the opportunity to work with and tour with some important and influential artists such as Taylor Swift, Cilin Raye, Mark Chesnutt, Chuck Wicks, Paul Brandt, David Nail, Jace Everett, and Trailer Choir.

From touring all over the world, playing TV shows, and session work, Matthew has been staying busy. Still living in Nashville with wife Heather and two sons Caleb and David.

Matthew is also and avid vintage Ludwig drum collector with snares and kits from the 1960s and 1970s. 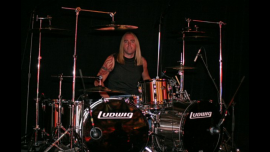