God is an Astronaut

Lloyd Hanney is an Irish Drummer and a member of the post rock band God is an Astronaut.

He joined them in the end of 2003 and has recorded 7 albums with them to date.

Lloyd started playing drums at the age of nine years old, growing up in a musical family,

he was influenced by his Dad Chris who played guitar with Irish rock band Time Machine,

And his Mums cousin, Robbie Brennan who played drums with Phil Lynott and Paul Brady.

Styles from Steve Gadd, Buddy Rich, Harvey Mason and also from John himself.

Lloyd’s first band was an 80’s Irish metal band called Skyline who won a national battle of the bands.

They released a single called Too Late, it got lots of national radio play and landed them a support slot with the Legendary UK blues band Doctor Feel Good.

During the 90’s & 00’s Lloyd recorded with various artists such as the Irish electronic duo Ufeari,

and also for Whipping Boy front man Ferghal McKee on his solo project and single What you Wanna Start.

Lloyd is originally from Bray Co. Wicklow Ireland, and now resides in Dublin with his Partner Maeve and their 3 boys.

God is an Astronaut 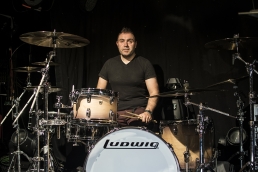