Hailing from the sunny Australian Central Coast, Josh Dufficy is an energized and road-worn player. He boasts an arsenal of extensive national and international tours, performing and recording with some of the biggest names in Australian country, blues and roots music.

Primarily self-taught, Josh’s focus has always been based around groove and energy, as opposed to an endeavour for flawless technique. This energetic style is what caught the eye of Australian alt-country/Americana songstress Kasey Chambers who offered him drumming duties in her touring band in 2014. Providing the backbone for Chambers’ band, Josh toured almost constantly for over five years and recorded on multiple ARIA-winning and #1 charting albums.

Since 2013 Josh has also performed with alt-blues rock two-piece band Grizzlee Train. Having no bass player led Dufficy to swap traditional drumming styles for those which filled more sonic space to compensate for the band’s lack of bottom end on stage. What resulted over a number of years of heavy touring and recording was a unique, tom-based playing style which has become the cornerstone of Grizzlee Train’s signature sound.

More recently Josh has been on the road with renowned boogie-blues trio Kristen Lee Morris & The Dirty Snakes who have been lighting up the Australian blues scene since 2018.

Playing drums since the age of five, Josh’s early education came mostly from playing along to Deep Purple and Creedence Clearwater Revival albums in his garage. Initial influences came from rockers Ian Paice, John Bonham and Stewart Copeland before evolving over the years to include the likes of Steve Jordan, Benny Greb, Jay Bellerose and Patrick Keeler.

When not on the road Josh also works in artist promotion and touring management and has a degree in Marketing and Media. 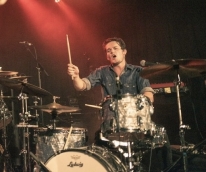