Elizabeth Chan is a touring and session drummer from New York City, based in Nashville, Tennessee. She has performed with a variety of artists, including eight-time GRAMMY Award winner Carrie Underwood, multi-platinum artist Keith Urban, and powerhouse country trio Lady A. Whether playing to anthemic rock and country melodies or accompanying folk and pop ballads, one thing is consistently evident: There is never a lack of passion in what Elizabeth does.

Music has long been a part of Elizabeth's life. Growing up in Brooklyn, New York, Elizabeth became highly involved in the rich local music scene of New York City. Under the direction of drum teachers Paul Tso and Phil Bloom, Elizabeth began diving into genres from rock to R&B, jazz to hip hop, and gospel to latin.

Elizabeth now resides in Nashville, Tennessee, where she serves as a live and session drummer, currently on tour with Carrie Underwood. 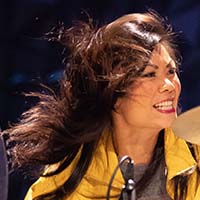