Poogie began his professional career playing with Tom Brown, Weldon Irvine and then Hugh Masakela. He then toured with one of the creators of hip-hop, Afrika Bambaata and the Soulsonic Force.  Working in traditional R&B Poogie toured with Freddie Jackson, Phyllis Hyman and Chaka Khan.

In 1987 he worked with Force MDs, a Temptations-style vocal group who were the first to incorporate R&B and hip-hop.  Poogie co-wrote & produced the title track of their hit CD “Touch and Go”.

He has spent the next 25 years collaborating with some of Jazz, hip-hop’s and R&B’s heaviest hitters including Marcus Miller, Stanley Clarke Keith Sweat, SWV, New Edition and Erykah Badu.

He now leads the Poogie Bell Band. who have released 6 albums and continues to tour and produce.

In 2018 Poogie was invited to tour China playing drum clinics and Masterclasses which he found incredibly rewarding and has been invited back in 2019. 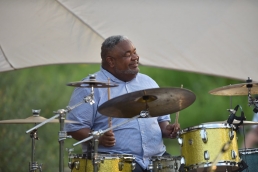 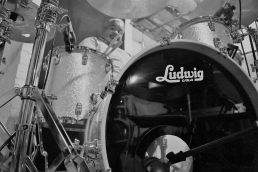 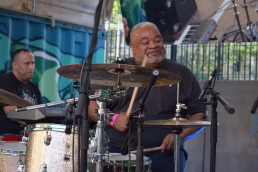