Brian Tichy (born on August 18, 1968 in Denville, New Jersey) is a drummer, guitar player, vocalist and songwriter. Since 2009 he has been the drummer for Foreigner although in 2010, he was replaced by Jason Sutter. Tichy began playing drums at age eight and started playing guitar at age 12. His earliest influences include Led Zeppelin, Kiss, Aerosmith, AC/DC and Van Halen.

Ball-While Brian has primarily toured and recorded with others playing drums, he has fronted his own band (BALL) in which he sings and plays guitar. Due to the untimely demise of his record label (Time Bomb Recordings), Ball_м_s American Aggression CD never was formally released. Ball did manage to release a CD, The Grand Human Disaster Scenario (only in Japan) in May, 1999. This CD contains what were essentially the demos that led to the record deal with Time Bomb at the end of 1999. His increasing role as co-songwriter with Billy Idol that started at the end of 2003 limited his time to focus on Ball.

Billy Idol-The Idol/Tichy writing partnership sparked the recording of Billy Idol's first CD since 1993. Devil's Playground (Sanctuary Records) was recorded in 2004 and contained 8 Idol/Tichy tracks. The CD was released in March 2005 and they toured for the remainder of the year.

While writing in 2006 for a follow up Idol CD, Brian and Billy recorded a Christmas album. This was done on their own, in Idol and Tichy's reheasal studio with Tichy playing all the instruments, engineering, and co-producing. Happy Holidays by Billy Idol was released in November, 2006 through Best Buy and in Europe.

Whitesnake-Brian was announced as the new drummer for Whitesnake on June 18, 2010.

Speed Bag-Brian has become a speed bag champion, promoting it via his Youtube videos for both physical fitness, and also as a musical instrument. He has plans to incorporate the speed bag into his drumkit. 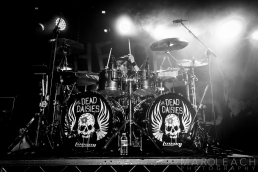 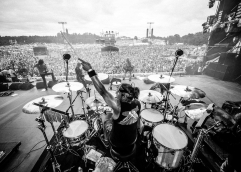