AYKAN ILKAN was born in Izmir in February 4th,1973.

He started his music career in 1985 with a band named "Sawdust" together with his elder brother Murat ILKAN who is also a very talented musician and has a unique voice as a rock singer. They performed various festivals and concerts until 1992.

In 1992, he took a major role composing of another band "KARGO" which they recorded their first album "Sil Bastan" in FT studios and continued their music career with a lot of concerts. At the end of that year, Aykan started to play with American blues and jazz musician Larry O'Neil as well.

For another project, again with Murat ILKAN, guitarist Metin TURKCAN and Berk EVREN, they came together for the new band “Cherokee" and participated many both festivals and organizations, besides playing in rock bars.

Meanwhile, Aykan was accepted for Mr.NO, the band that was chosen to be the most promising to be in 1995.

In April 1995, he decided to continue his music career with Sebnem FERAH,Turkey's most famous female rock singer ever.

They composed, arranged and recorded their songs in different studios for many albums

Since that time, they have given hundreds of concerts here and abroad.Aykan is also a drum teacher and having many students varying from young to old.

Aykan ILKAN is married and has one son named ROHAN, he lives in Istanbul.

He likes travelling and discovering different cultures around the world. 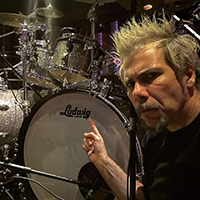