Alan Cage is the drummer from NYC experimental hardcore band Quicksand, which released their latest album Distant Populations in 2021 on Epitaph records. Quicksand formed in 1990 and released 2 critically acclaimed records before their breakup in 1995. Reuniting in 2012, Quicksand began touring and released Interiors in 2017, picking up where they left off elevating their unique blend of hardcore. Alan began his career in the late 80’s playing in NY hardcore bands Beyond and Burn. He’s also toured and recorded with several other bands including Seaweed, New Idea Society, and 108. When not touring or recording with Quicksand, Alan teaches drum lessons in NYC. 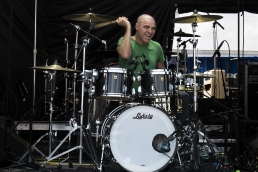