Adolfo Torres was born in Cali, Colombia and at a very young age, his passion for music and drums was evident. Hitting on pots and pans with sticks that used to belong to his sister and singing along to Beatles and Queen records, his parents decided it would be wise to get him some drum lessons with a local teacher. He attended the Dixon music academy for the next several years.

At the ripe age of 18, he attended the Drummers Collective NYC where he would learn about many of the intricacies of the instrument and where, after countless hours of practice and dedication, an overall musical essence would be unveiled. Encouraged by a number of his teachers, he applied to Berklee College of Music where he would enter with an American Tour Scholarship. Both experiences proved to be immensely enriching and life changing.

Upon completion at Berklee, Adolfo moved to Austin,TX where he would reside and work for one year. Artists like JT Coldfire and Jeniffer B and the Groove Kings would teach him about life on the road, the life of a working musician in the USA.

In 2013, Adolfo relocated to Bogotá, Colombia and began work on his current projects: Leader, composer, producer and drummer of a band named M.I.J.O, a blend of Classic/Modern/Progressive Rock with which he had the pleasure of playing in NYC and touring Colombia and his own practice as an independent educator and session drummer.

Adolfo currently resides in Bogota, Colombia where he is currently working on his new record with M.I.J.O, online lessons, an online drum masterclass and a podcast for the drumming community of Latin America. 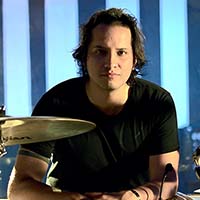