Twenty-three year-old Madden Klass is a vibrant, multifaceted player making herself heard and known by many through her prolific videos and performances. She has found success touring alongside an extensive range of artists (Mike Doughty, Wheatus, Dixie D’Amelio, Allison Ponthier and Matt Maltese) as well as cultivating her own sound with Space Junk is Forever. With roots in progressive-rock, alternative-rock and pop, Madden has always seen her role as a player in the composition.

While simultaneously finishing up her studies at Berklee in 2020-21, Madden built herself a home studio to capture and refine her drum sounds, allowing her to enter the world of studio recording. She can be heard playing on Mike Doughty’s Ghost of Vroom 2, produced by Mario Caldato Jr. She has also found success in the drum community gathering more than 90K followers through curating content on Instagram. 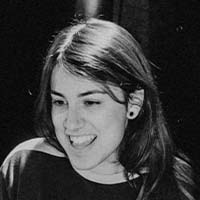